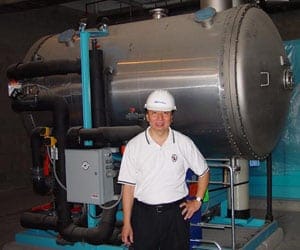 Ozone is made up of three Oxygen atoms. Once of these has a weak hold on the others, and is more than willing to transfer electrons with other organic substances, such as bacteria, and viruses. This single Oxygen atoms binds with the other substance, causing it to oxidize . The byproduct of Oxidation in this case is a single Oxygen atom.

Ozonation water purification systems create Ozone with something called an Ozone Generator, which creates O3 in much the same way as the sun does. Inside the chamber is a high intensity Ultraviolet (UV) light. Compressed air is forced into the generator’s chamber, which then converts some of the oxygen in the air into Ozone.

The Ozone that has now been created inside the Ozone generator is then sent through a line into a diffuser, which creates ozone-saturated bubbles. Water is drawn in to mix with the bubbles, and then fed into the water purification tank. The weak Oxygen molecule in the Ozone attaches to other organic molecules in the water and oxidizes them.

Oxidation of metals such as iron and manganese is quick and efficient over a wide pH range. Iron in the ferrous state will be rapidly oxidized by ozone to the ferric state whereby gelatinous ferric hydroxide will precipitate. Soluble manganate occurs in the divalent form and will be oxidized by ozone to the tetravalent form also very rapidly. Tetravalent manganese hydrolyzes, and it will produce insoluble manganese oxydehydroxide which can be precipitated over a filter bed. Nitrite ions can be oxidized with ozone also very rapidly, forming nitrate ions which are stable and soluble.

Hydrogen sulfide which can give the water a foul odor (rotten egg) can quickly be oxidized by ozone in various stages, the last stage being the sulfate ion. Sulfates are innocuous and, in many cases, can be filtered. Another important oxidation with ozone is for arsenic. However, it is important that the raw water contains magnesium or calcium cations. In the presence of these ions, ozone will produce insoluble magnesium and/or calcium ortho-arsenates which will precipitate.

Turbidity will also be affected by ozonation. By definition, turbidity forms through the suspension of microscopic particles or colloidal particles which can be organic or inorganic in nature. These particles often have the same electrical charge – namely being positive. Ozone has a negative charge, and upon reaction, the particles are neutralized and will precipitate.